St. Kitts is now once step closer to qualifying for the second round of the FIFA U-17 World Cup Qualifiers. Tonight(29th July, 2012) they played their first match against USVI at Warner Park. 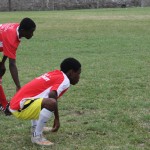 From the inception of the match, there was not a doubt that those boys would dominate and make their country proud. The captain of the team led from the front with two goals and even when he was substituted, his team still fought on in winning fashion. Jamieson McKoy scored one goal and Evansroy Barnes scored the final goal, a beautiful strike off his left boot.

USVi tried to make a comeback but the little “Sugar lads” held firm and only allowed one shot to be placed on target in the entire second half, one which was tipped over the bar by goalkeeper Shavene Boston.

The St. Kitts-Nevis team played an exceptional game and despite having many chances only managed to score four(4). USVI and Barbados will go head to head on Tuesday 31st August at 7:00 p.m and then St. Kitts and Barbados play on Thursday. If Barbados beat USVI more convincingly than 4-0 We will have to defeat them in order to win our group and advance to the next round.

Best of luck to our youngster!