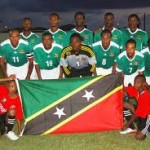 It was an exciting matchup at Warner Park on Sunday when the St Kitts Nevis Sugar Boyz came head to head with the Spice Boyz from Grenada. Within the first minutes of the game the Sugar Boyz showed their dominance when Attis Hughes tested the Grenada Goal Keeper with a shot to goal.

That would be the trend of the night as both goal keepers were kept on their toes. Both teams took every opportunity to shoot to goal. There were several exciting moments during the match as the St Kitts team played with lots of confidence. They were no means intimidated by the Grenada team. The Grenada team also showed why they are heading to the CONCACAF Goal Cup as they had several good breaks and challenged the St Kitts-Nevis defense. At the end of regulation time both teams were denied goals. It was indeed a game of high standards, with a display of talent, skill and determination from both teams. The large crowd at Warner Park was surely not disappointed with the home team as they stood their ground against Grenada and dominated most of the game.

The St Kitts team was injected with some new faces and it showed in the enthusiasm of the players from the start of the game. The new players on the team were Rovan Wigley, Attis Hughes, Kendale Liburd, Kareem Harris, Lesimba Challenger, Alister Warner and Mudassa Howe. These players were not in the senior team that played against Grenada in the Digicel Caribbean Cup last year. It was an opportunity for the coaches to play some of the younger players who will be practicing for the under-23 Olympic Qualifiers later this year.

The St Kitts Nevis team will be traveling to Grenada this weekend for the return leg of the friendly matches. The team resumed practice on Monday and will continue for the entire week until their departure on Friday. They will play on Saturday 2nd April. The SKNFA would like to wish them well and also to encourage the Federation to show their support for the team.