Basseterre St. Kitts- 26th March, 2013- The SKNDA’s Premier League seems to definitely be making a splash effect, just as everyone had *prejudged*. The first day of the new season (Thursday 21st March) began with a double header. The first match, played between the Cayon FC and the UDC Garden Hotspurs FC. Although the Udc Garden Hotspurs qualified for the final four tournament and Cayon were on the verge of relegation, Cayon held their own and actually scored the first goal although the game ended in a 1-1 draw. Scoring for Cayon FC was Kurt Morton in the 18th minute. Carlos Bertie was the one for UDC Garden Hotspurs in the 78th minute in order for the them to leave with one point. Yellow Cards for this game were issued to Carlos Bertie (Spurs) Shaquille Adams (Spurs) 85th minute

On Saturday 23rd March, another double header matchday took place and featured Mantab and Rams Village Superstars. Although the outcome was not one that was expected, this only attest to unpredictability of the game. Goalscorers were
Kirae Jarvis 8th minute (penalty) and Jermaine Carey 86th minute (penalty). Yellow Cards issued in this game were:
Jason Phipps, Kelvin Taylor, Jamorn Thomas, Darian Huggins all of Mantab and Javin Matthew, Kevin Hanley and Joel Jeffers of the Rams Village Superstars.

In the second match of the night Conaree played the S. L. Horsford St. Pauls. This was the match that sparked many discussions as to what the outcome would be. Andy Samuel gave Conaree the lead in the 37th minute. The first half ended at 1-0 but it was Errol O’Loughlin who extended the lead and sealed the deal 90th minute. Cards issued were to
Kadeem Lewis (Conaree),Madassa Howe (Conaree), Austin Lewis (St. Pauls),Josh Leader (St. Pauls) and Marvin Charles (Conaree).

On Monday 25th March, Harris Paint St. Peters Harris Paint and St. Thomas/Trinity Strikers. St. Peters came out with a bang. By the time the first half had ended the game was already 2 goals to nil in favour of St. Peters. Ten minutes into the second half St. Peters had already increased their lead to three nil. The last goal of the game came in the 78th minutes compliments Kirkland Harris who had already scored in the first half. Aiden Nurse was responsible for one goal and Miguel Crawford of the St. Thomas Trinity Strikers scored an own goal. Yellow Cards issued were Randel Brookes (St. Peters), Kyrhon Phillip (St, Peters), Daryl Caines (Strikers) and Dornell Bernier (Strikers).
Red Cards were issued to Delroy Barzey (St. Peters) and Azeem James (Strikers).

Below is the point standings for the league thus far: 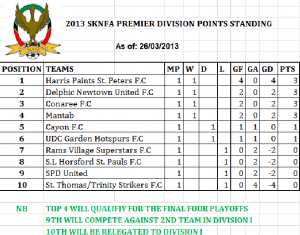