Ja’mar “Papi” Smith, Raheem “Pipe” Francia and Tahir “tata” Hanley have all been chosen by the great John Barnes, former Liverpool player, to train in Barbados with coaches affiliated with the Chelsea F.C team. All three men had two days to prove they were worthy of such a great opportunity after being selected in the top thirty(30) in the John Barnes Digicel Kick Start Clinic. 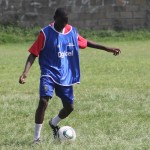 The guys underwent drill testing in the first day of training and had to prove that they were capable of understanding slighty complex drills and could execute them. On the second day of training, there was a hot shot competition where aim and accuracy were the focus. Each player had ten chances to strike the ball through as many holes as possible, racking up points according to the position of each hole.

G’vaune Amory emerged the winner of this after undergoing three rounds of tie breakers with Gelmon Bridgewater and Michael Jonis. G’vaune will go on to compete against other countries in the Hot Shot competition with Mr. Barnes. 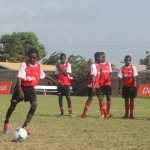 At the end of the day Ja’mar, Tahir and Raheem were the three that stood out the most and thus, were chosen. Last year Vinceroy Nelson, Evanseroy Barnes, Hasani Flemming and Wazim Howe were chosen by the Academy to train in Trinidad. This year the guys will journey to Barbados to train with the coaches of Barclay’s Premier League’s Chelsea F.C. 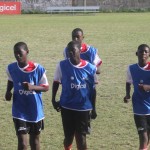 Each participant received an autographed ball from Mr. Barnes himself as well as a certificate of attendance. Congratulations to all three guys, we wish you well in your football future.