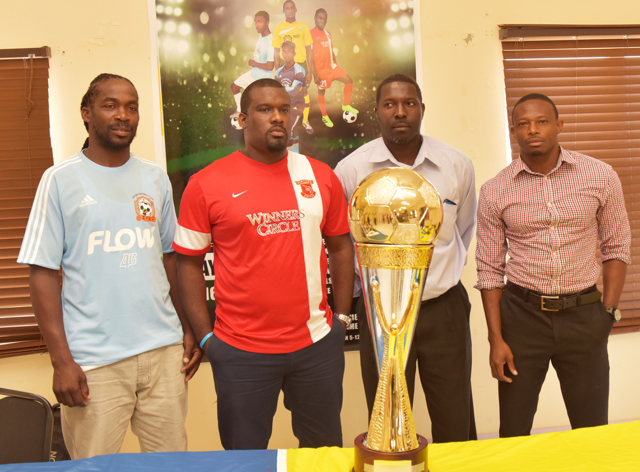 President Johnson was speaking at the official launch of the 2016 Final Four competition held Thursday, 19th May, at the SKNFA Football House headquarters.

He commented, “This Final Four, we believe, will be the most exciting Final Four in the history of the competition. I believe we will have an extremely competitive Final Four… I believe we have on show this year extreme quality in terms of the clubs that are participating.”

Johnson congratulated the four teams that were successful in getting into the Final Four from the 2015 – 2016 Premier League. At the end of the three rounds of matches played in the League, Winners Circle Newtown, 58 points, emerged top of the points-table. SOL Island Auto Conaree FC is in second position with 54 points, S L Horsfords St. Paul’s United, the defending champions, earned 49 points, and FLOW 4G Cayon Rockets secured 49 points as well.

The Final Four tournament starts on Saturday, 21st May, with a double-header at the Warner Park Football Stadium. At 6 pm, SOL Island Auto Conaree competes against S L Horsford St. Paul’s United. At 8:30 pm, Winners Circle United will play against FLOW 4G Cayon Rockets. Matches will also be played on the 25th May and the round-robin series of games will conclude on 28th May. The two top teams will then begin the Best of Three phase on the 10th June, and will continue on the 14th June, and if necessary, the third game will be held on 17th June.

Not forgetting the strong fan base that all of the competing teams have, President Johnson urged all spectators to be on their best behavior. He said, “We encourage the fans to come out, as passionate as possible, but at the same time, to be on your best behavior… Final Four is excitement. It’s fun, but it’s competition. At the end of the day, we want the best team to emerge as champions of St. Kitts and Nevis for 2015 – 2016.”

The president also thanked the sponsors, including the SKNA National Bank for its two-year relationship with the SKNFA and the Premier League, as well as for its contribution to the social and economic life of St. Kitts and Nevis. He commended also the sponsors of the various clubs, indicating that the club sponsors play an important role in sustaining the club system.

Meanwhile, Ms. Shirna Pemberton, the marketing manager at the St. Kitts-Nevis-Anguilla National Bank, reaffirmed the Bank’s support to the SKNFA and the Premier League.

Pemberton stated, “I am here to affirm our partnership, our commitment, our support to the St. Kitts-Nevis Football Association as they host the Final Four. National Bank has been a major sponsor of the SKNFA Premier League, and we continue to lend our support to the games.”

Considering the period time in support of football in the federation, she said further, “It has been a very long, very healthy, very rewarding relationship, and we look forward to an even greater and mutually beneficial partnership for years to come.”

Pemberton also congratulated the teams that advanced to the Final Four, and took the opportunity, also, to congratulate the SKNFA on the FIFA ranking of the National Senior Men’s Team, the Sugar Boyz, to position 92, the first time being ranked below 100.

She said, “I understand that this historic achievement means greater opportunity globally and to the area of sport.”