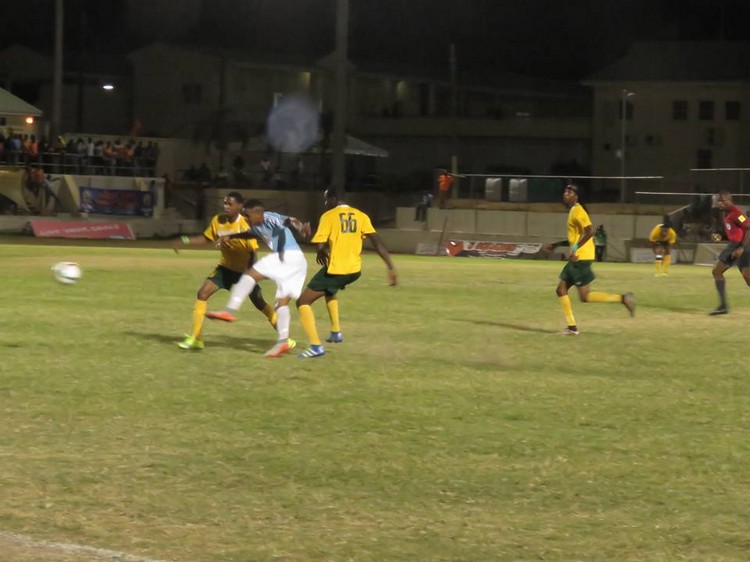 It is not going to be easy. It’s going to be a very competitive game Tuesday night, said Coach Alexis Morris of the SOL Island Auto Conaree FC, which beat FLOW 4G Cayon Rockets 2 – 0 in the first of the best of three encounters.

Morris said, “The game on Tuesday night is going to be very competitive. I don’t expect the Cayon team is going to make it easy for us.”

In fact, Coach George ‘Yellowman’ Isaac of FLOW 4G Cayon Rockets said they will be playing a better ball game. They have plans for Conaree. “We’re going to approach the game with a better spirit, a better mentality and attitude to win on Tuesday and push the finals to a third game. We have to do what we have to do in this second game,” Coach Yellowman said.

On the preparation of the team’s Conaree players to meet the Cayon challengers, Morris said, “We are mentally and physically fit, and we expect the entire Conaree community to come out Tuesday evening in anticipation of hoisting the championship… We don’t expect it to go to three games. We will be coming out on all cylinders come Tuesday night.”

According to Coach Morris, past experiences of the team in the Final Four do not count. He said, “I don’t think there is any advantage at all for Conaree. The football is played on the pitch for any given day. We are not thinking about what we have done before. That’s in the past. So, we are not going to be complacent at all. We are going to go out and play good football.”

Speaking of their fan support, he pointed to the ’12th Man’ – the fans-based cheering squad. He pointed out, “They have done a superb job rallying for the team no matter what. But, we are also encouraging the Cayon fans to come out as well and cheer on their team. The public needs to come out to Warner Park and witness good competitive football.”