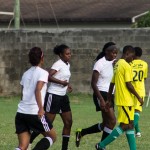 The Head Coach or the team team Mr. Lester Morris in an interview with the SKNFA revealed that this was his 3rd tournament as head coach since his appointment as such in 2010. “In 2011 the team was able to advance to the second (2nd) round fthe CFU World Cup Qualifier in Suriname”. We lost to the powerhouses of the Caribbean (Cuba, Jamaica and T&T) in the second round although the team did extremely well.

In the second tournament we faced two formidable opponents in Haiti and Puerto Rico. The team did not advance but gave a good account for the most part. 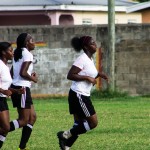 “Not much time was spent on team play but an advantage that the team has this year is that they are closely knit, that is something that we hadn’t seen in recent teams. In addition, because of the current girls’ league and the amount of contact time spent with them, this year should again advance to the next round though goalkeeping is a sour note in the team.

Moris is very confident that the team will advance at least to the next round and the SKNFA wishes them the very best. 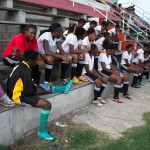