The Under-17 ‘Sugar Boyz’ played to a 2 – 2 draw against their Barbados competitor in their opening match of the Caribbean Football Union Group 1 qualifiers played at the Warner Park Football Stadium in Basseterre. 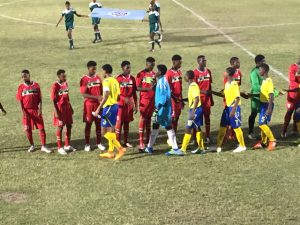 From the start, it was clear that both teams wanted to win. Play was assertive, testing the opposing team regularly, but it was Team St. Kitts & Nevis that opened the scoring with a goal in just 4 minutes of play in the southern half of the field when Dylon Morton beat the goalkeeper off a corner kick from the east.

Both teams thereafter attempted to build their plays going down the left and right flanks of the field, testing the goalkeepers, who made saves on several occasions. Play was positive and entertaining for the good size crowd that came out to see the first day’s play of Group 1 in the Under-17 CFU tournament.

By the time Barbados scored the equalizer in the second half of play, the rain was pouring. Barbados was doing a better job at ball possession, when Ray Francis scored the equalizer. But not more than a minute later, in the 57th minute, Javaughn Brookes made it 2 – 1 in favour of St. Kitts & Nevis.

With play almost at an end, it seemed that Team St. Kitts was attempting to ‘shut down’ the game on the Barbadians. It was not to be, and Barbados’ Avery Chandler got pass the St. Kitts & Nevis goalkeeper to score the second equalizer of the night in the 1st minute of added time in the second half.

More positive play by Team St. Kitts & Nevis in the brief remaining time could not change the outcome.

The Group 1 qualifiers continue on Friday, 22nd July, when Cuba plays Barbados starting at 4:30 p.m., and St. Kitts & Nevis coming up against Dominica at 7:00 p.m.