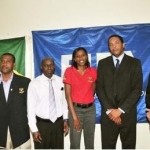 The WIWC programme which was launched in the federation is the first youth programme of this magnitude for the St Kitts Football Association. The General Secretary spoke of the amount that was being invested by FIFA, he explained “The WICWC Programme is a historic programme as we have been given a grant of USD$150,000. The Programme will be used for various aspect of youth development in the Federation.”

Dick Howard WICWC Regional Manager explained the background of the programme he stated “WICWC is a programme that was started by FIFA about 3 years ago. It started in Africa just before the World Cup. It was then adopted by Oceania Federation and then Austin Jack Warner President of CONCACAF felt that it would be a good programme and also applied for it to be within the CONCACAF Federation. Originally there were 9 countries in the programme and then it was expanded to 11 countries which consists of St Kitts & Nevis, Dominica and St Lucia.”

The Technical Director of the SKNFA Lenny Lake outlined the WICWC programme for St Kitts and Nevis. He explained, “The programme will consist of Club Development, Youth Leagues, Youth Coaching Courses, Youth Referee Courses as well as an Elite Player Programme. There will also be upgrade to the youth facility which will be identified; IT equipment will be purchased in order to tape and record games etc.

Mr. Lake also explained “part of the programme is to have each club adopt a primary school within their community in order to receive the benefits from the programme.”

Minister Phillip spoke about his ministry’s commitment to the programme and praised the SKNFA for the new initiative. Minister Phillip stated “the initiative has the capacity to revolutionize the social order of young people, and the nation as a whole.”